These were the prophetic words of Simeon to the virgin Mary, at the Presentation of the Infant Jesus at the Temple.

Almost 33 years after, these words found way to reality: On Calvary the Blessed Mother held the dead body of her divine Son. It was after His crucifixion, death, and removal from the cross, and just before He was placed in a tomb…a tomb from which the light of resurrection will emerge …. But this latter is another story!!!

15th century after, the master-sculptor of the Renaissance Michelangelo brought this scene to life again in His famous: La Pieta.

This magnificent work of sculpture remained the only work by the artist to ever bear his signature …. For it is suspected that just days after its installation in St. Peter’s Basilica, Michelangelo accidentally overheard some visitors’ comments that Michelangelo was too young to accomplish a sculpture of such beauty and that the work had been completed by another artist; outraged, that night, under the cover of darkness and out of pride, Michelangelo snuck back into the Basilica and etched an inscription by candlelight, in Latin, across the Virgin’s sash: “Michael. Agelus. Bonarotus Florent Faciebat” (Michelangelo Buonarroti the Florentine, made this). But having regretted the outburst of pride, Michelangelo vowed never to sign another work again; and he never did….

Now, this masterpiece was carved out of a block of Carrara marble that the artist described being the most “perfect” block he ever used!!

The two figures of the Holy Mother and Christ widen in a progressively status down the drapery of Mary's dress, to the base, the rock of Golgotha…

But interesting enough is the fact that the two Holy figures are engraved so as to appear in a unified composition which forms the shape of a pyramid, and the vertex coincides with Mary's head. There is a unity in this most cruel Martyrdom: Jesus’ crucifixion crucified Mary’s heart…. as St Bernard put it: "Mary was a Martyr, not by the sword of the executioner, but by bitter sorrow of heart."

Despite this harsh reality, Michelangelo worked serene faces that do not reveal much signs of “The Passion” . Shown on the Lap of His mother a last time, our Lord seems to sleep just like when He was a baby, calmly… The artist did not want his version of The Pieta to merely represent death, but rather to show the vision of abandonment and trust in God thus the representation of the communion between man and God by the sanctification through Christ.

Nevertheless in supporting Christ, the Virgin’s right hand does not come into direct contact with the Lord’s flesh; instead it is covered with a cloth which then touches Christ’s side.  This symbolizes the sacredness of Christ’s body.  Largely, these two figures are beautiful and idealized, despite their suffering and agony…..

Another noteworthy feature was the juvenile Madonna: we see her represented as being very young for the mother of a 33-year-old son …. She actually must have been around 45-50 years old when Jesus died. Michelangelo answered that he did so deliberately because the effects of time could not mar the virginal features of this most blessed of women. He also said that the mother's face will always be a symbol of eternal youth...

Anyhow, la Pieta seems to gracefully personify “Christian Hope” on the eve of Good Friday where the youthful serene face of Mary waits in stillness the joys of the resurrection Sunday…. Her lips despite the sorrows hold a silent prayer of Hope with an unmistakable trust in God, and from inside the marble emanates the words of the ancient psalm ” The LORD is my strength and my song; he has become my salvation.” 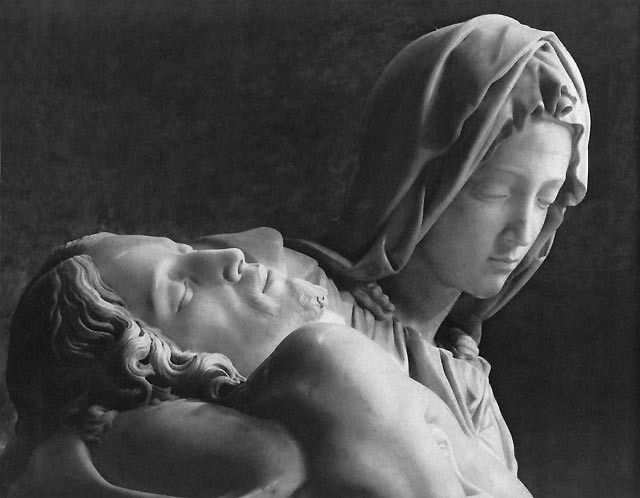 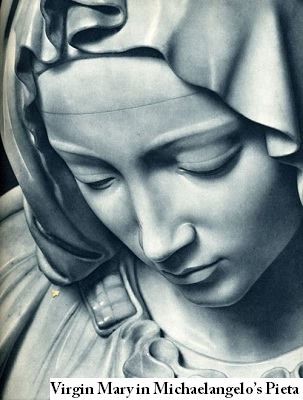 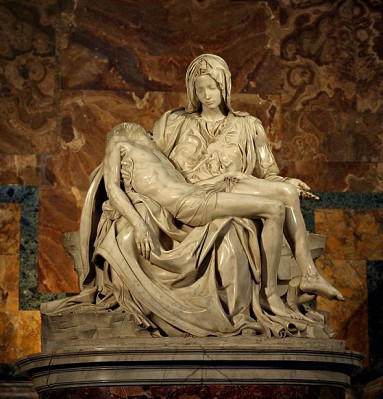 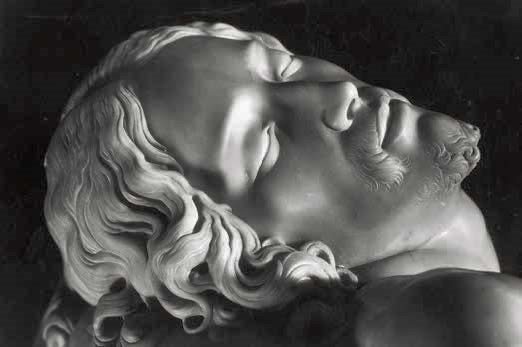